A month later, on my way to Syracuse, NY to work at the New York State Fair (booth sitting for a basement waterproofing business), I stopped by the newly-built Walmart in Rome and bought the album on cassette. 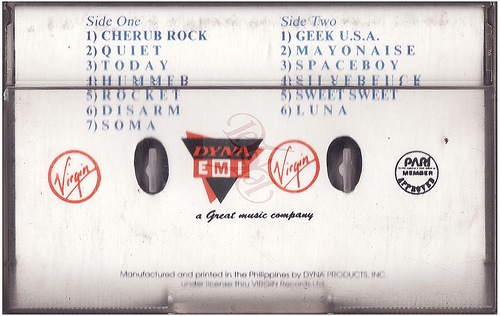 I think it was the last cassette tape I ever bought, and I think the primary reason I purchased the cassette version was because my step-dad’s late 1980’s Buick Skyhawk had a cassette deck and I didn’t yet have a portable CD player.

I suppose I could wax rhapsodic about the album, take histrionic license in describing how it affected me, or make grand claims of its wider cultural significance. I doubt it needs that kind of support or defense. Just the fact that it still holds water for me after 20 years feels pretty significant when so much cultural flotsam has easily floated away. I’ll try to contain myself.

Yet even after two decades I can still remember some the feelings I had first hearing those songs. I literally caught my breath when Soma, the last song on the first side of the cassette, transformed from hush to roar in my ears that first time. I had been turning the volume up and up and up during that first side, and the quietness of the initial minutes of the track yielding instantly to the guitar blast was awesome to experience with no prior knowledge of what was about to happen.

That pivot – from Soma finishing side 1 and Geek USA opening side 2 – was astounding. I think these two are my quintessential Smashing Pumpkins songs. They both share a kind of binary form where the balance between the hush and the roar is necessary to their emotional content. The stuff that Corgan is talking about in these songs – the existential rush of desire and fear, love and death, meaning and dissolution – requires more than a simple, single movement. So when Soma blows up or Geek USA stills its storm we sense the contours of one man’s deeply-felt reflections.

Here are the lyrics at the key moment between the two movements in Geek USA:

In a dream
We are connected
Siamese twins
At the wrist

It’s completely appropriate that we find a nod to the album’s title in the whispered words between each half of the song.

The longest track on the album, Silverfuck, takes this ebb-and-flow/hush-to-roar mode to another level, blasting through a ramrod guitar and drum interplay into scintillating psychedelic dreamscapes until pausing for an echoed spoken word intermission only to scream through the huge main theme and spin off in distortion and buzz. It’s exactly the melodrama and bombast that the Pumpkins – a la Billy Corgan – have always stood for.

Siamese Dream is full of great moments sonically and in the sentiments it carries; it’s easy to understand why this album resonated with a generation of teenagers. I don’t know that is truly relevant to my life or emotional state now, but I greatly appreciate the work in aesthetic terms, particularly in the balance and interpolation of big concerns with big sounds. Just a few short years later the Pumpkins would take all of this to a completely cosmic – and semi-psychotic – level on the Mellon Collie and the Infinite Sadness double album. If Mellon Collie represented a serious kind of break from reality, I think it’s clear that Siamese Dream is solidly rooted in reality and felt experience. In it you hear just some conflicted, weird young kids from Chicago trying to carve out a space for their hopes and hide away from their fears. You can see the complexity of these emotions in their performance at The Metro in Chicago on August 14, 1993, which was a CD release event. Click here to watch it.

Or just pick up Siamese Dream and listen closely.

I’ve got a solo exhibition coming up October 5 – October 25, 2013, in Hays, Kansas. The exhibition, titled ASEVENANDAWONADOE* will take place at the Moss-Thorn Gallery of Art on the campus of Fort Hays State University. Featuring thirty new works, the exhibition will unite the representational tondos and abstract mandalas that I have been creating simultaneously over the last few years.

Here is a brief statement about the show. A longer version will be presented during the closing reception:

This exhibition explores the reality that a vernacular of meaning is constructed through our physical, emotional, and intellectual experiences. These experiences take place in the spaces that surround us, via the ideas that fill our minds, and through the objects that engage us. Meaning is imputed to these spaces, ideas, and objects rather than being necessarily inherent in them. This notion follows from the work of 20th Century Pragmatist philosopher John Dewey, who described how we “fund” our lives with significance through investments of time, emotion, and effort. These, in turn, come together to manifest the wealth of meaning we sense in our world.

By concentrating my artistic contemplation on objects that I have funded over the course of my life, I draw attention to not only their significance but also the modes, methods, and extents to which others have done the same. Conversely, by exploring issues that previous generations have investigated, such as the mandala form and geometric abstraction, I participate in the legacy of their contemplations. In a sense, I have borrowed from the storehouse they built while adding an investment of my own. The works on display here play on the distance between representation and abstraction, between the iconic and symbolic, between the organic and geometric, and between the received and the constructed.

*ASEVENANDAWONADOE is a word my young daughter Miranda invented during the time she was learning “real” words. It combined the structures of the new words she was encountering but was also, to her, connected to abstract concepts such as mathematics, pain, comfort, and security. An entirely made up word – yet one that relied on the received information and influences my daughter experienced – ASEVENANDAWONADOE is an example of something seemingly “meaningless” taking on meaning through experience, context, and subjectivity. In adding to the history and lineage of this word by including it in this exhibition, I further shape the contours of its potential meaning and more deeply connect it to the story of our family.

I saw this today on the Huffington Post (the inimitable Anne Harris brought it to my attention – thanks!), and it’s the 100% truth:

Click above to watch Hollie McNish’s spoken word recital about the appropriateness of breastfeeding and the inappropriate stupidity of the western world for having a problem with it.

Recently I’ve become more and more annoyed with the fact that women continue to be presented as eye-candy for men, while legitimate explorations of the body in art are consistently challenged. Writer Amy Wilder interviewed me a few weeks ago about this very issue.

These issues won’t go away. It’s happening right now in our culture. A few months after Robin Thicke’s idiotic and misogynistic music video went viral, Justin Timberlake entered the fray with his own. Both of these videos pair the fragmented display of women’s bodies with the rape-language of “you/i know you want it”. No, I won’t link you to the material I’m talking about. You’ve probably already seen it.

It’s pathetic. It’s frustrating. It’s wrong. It’s wrong for specific profit-producing demographics (be they people or industries) to drive the cultural position and presentation of women’s bodies in this world. That’s exactly what’s happening here. It’s been happening for generations.

Part of what is playing into my anger about this is that I watched the documentary Girl Model, which really disturbed me. If you haven’t watched it, do it. It’s streaming on Netflix right now and is eye-opening.

On top of this, going through the adoption process over the last year really disabused me of the rose-colored-glasses ideas I had about the progress of women in the last couple of decades. Globally, it’s dangerous to be born female. In the west, where we think we can rest on the laurels of our “progressive” progress, it’s hard to make people understand this. I won’t recount the horrific stories that have been in the news recently. But it’s in THIS STUFF – where women are asked to APPEAR but not to ACT – that we continue to fail as societies. Our media continues to present a vision of women as young and as tight and as coquettish as men want them to be. The second their bodies resist the classification of appearance (for instance, when a woman breastfeeds her child or becomes too old to fulfill the wish-fantasies of 18 year old boys) they are simply denied. Hidden. Disappeared.

This is a major problem, and more people need to get angry about it.

I think about the world my two daughters are living in…

Getting that Spring Break quarantine art rhythm on! Using @inventables #x-Carve and @elegoo_mars resin 3D printer along side my standard painting and drawing to make the most of this time!